The RN Kao book: A peep into early years of R&AW 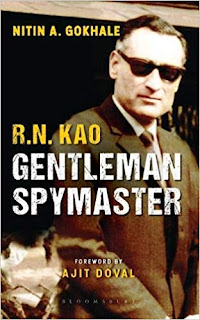 Friends, resuming posts here after a long time primarily because I have been involved in other critical and time-bound projects. One of them was the biography of RN Kao, (RN Kao: Gentleman Spymaster) who founded the ARC and the R&AW. The book is in print now. For the moment, read my introduction to what I consider my toughest book so far. Subsequently--and very soon--will publish relevant excerpts here and elsewhere.

Where does one begin to chronicle the life and times of a colossus like Rameshwar Nath Kao? Does one begin with his greatest moment of glory in contributing to the liberation of East Pakistan and the formation of Bangladesh in 1971? Or the fact that he was the founder of one of the world’s best spy agencies, the R&AW? Does one talk about his fiercely private personality? Or his wide-ranging contacts in the secretive world of espionage? For an author like me, it had to be a combination of the personal and the professional to try and capture the essence of Kao, the man, the legend. Somewhere deep in the archives of the Nehru Memorial Museum and Library (NMML) in the heart of New Delhi, lies a set of papers that researchers and historians interested in recording the history of Indian intelligence would love to get their hands on. Alas, only part of those papers—transcripts of tape-recorded dictations left behind by Kao—are currently available. Three crucial files on Bangladesh, the merger of Sikkim and Mrs Indira Gandhi’s assassination, will not be open until 2025, according to instructions left behind by him, months before he passed away in January 2002.

Since those tapes and papers are not public, this biography of Rameshwar Nath Kao—RNK or ‘Ramji’ to his friends, colleagues and family—had to depend on the personal

memories of a vast array of individuals who knew him in different capacities and their interpretations of his personality and contribution, apart from his correspondence with varied intelligence professionals. The task was made doubly difficult by the fact that Kao was by nature a very private person. He was rarely photographed. Except for a tape-recoded interview to Pupul Jayakar, one of Mrs Indira Gandhi’s closest friends, RNK is not known to have given any public statements or formal interviews with any journalist. So, when I was requested to undertake this task, it seemed impossible. But thanks to help proffered by the RN Kao family, the three personal files of Kao that are now open for researchers and scholars at the NMML, the PN Haksar papers and R&AW’s former officers—some of them retired as chiefs of the organisation—I was able to put together this first full account of the personal and professional journey of Ramji Kao, the sensitive, compassionate man behind the façade of a distant, stern spymaster.

Not everyone who made this book possible can be named but some who  can be are: Shakti Sinha, Director of NMML, for his generous and quick cooperation in locating and making available the Kao files; Vikram Sood, former R&AW Chief, himself an author, for his timely and critical interventions in reading the early draft of the manuscript; my colleagues in www.BharatShakti.in and www.sniwire.com, the two digital platforms I own and run; Soumitra ‘Bobby’ Banerjee, my former boss in early days of my journalism career (for reasons which will become apparent when you read the book in detail); the most supportive team of Paul Kumar, Jyoti Mehrotra, Rajbilochan Prasad and Satyabrat Mishra of Bloomsbury and last but not least the Kao family.

The book however has become possible only because my wife Neha and our sons, Harsh and Utkarsh, put up with my crazy schedule of writing 10–12 hours a day at a stretch for two months. During this period, I cancelled a pre-scheduled foreign trip with my wife, movie going was put on hold and family dinners became a hurried affair in the race to meet the deadline.  It is their support that  allows me to function stress-free when I am doing projects with the tightest deadlines imaginable.

Finally, I can’t thank National Security Adviser Ajit Doval enough for penning the foreword. It is a rare honour to write the untold story of the iconic RN Kao; to have Mr Doval, another legend in the world of intelligence, introduce the book, is a double privilege.

One last word. This is neither history nor a detective thriller. It is by no means a comprehensive chronicle of the   R&AW either. Just read it for what it is: a short glimpse into how organisations tasked to protect India’s national interests took shape. Many have contributed in the making of this book but the shortcomings are entirely because of me.