Let the Army do its job

Last week, Capt Amrinder Singh, Maharaja of Patiala, soldier and now politician, wrote a heartfelt piece batting for the Indian soldier deployed in Kashmir and berated the political as well as military leadership. The burden of his lament was: The Indian Army in Kashmir has been de-fanged and is fast becoming an "army of girl guides." The article immediately gained currency and wide circulation, especially among retired faujis, already angry with the government for various alleged sins of commission and omission on One Rank One Pension and 7th Pay Commission issues.

Capt Amrinder had some valid points in his piece, written more as a soldier that he was. However, the politician in him could not resist the temptation of taking pot shots at the current leadership. "The Government of India must allow freedom of action to the Army. The directive must be just one: 'Bring a situation in the state where the writ of India runs and not that of the ISI,' he wrote, hinting that the current government at the Centre which has an alliance with the PDP in Jammu and Kashmir was going soft on militancy in Kashmir. He was being economical with the truth. But more of the status of counter-insurgency a little later.

Coming back to Capt Amrinder’s piece. As a political leader, he has the liberty and right to criticise opponents. The sad part is he has used the Army and its so-called lapses to hit out at the political leadership. "For instance, in Budgam when a car broke through a military checkpoint in November 2014, the soldiers manning the post opened fire, as was their duty. One officer and eight jawans were court-martialed and imprisoned. Penalising soldiers for doing what was expected of them is unacceptable. It is for the Chief and his Northern Army Commander to stand by their men in the difficult duty they are performing and not succumb to political pressures," Capt Amrinder writes in support of his criticism.

However, as it turns out, no such court martial took place. The Army’s Northern Command which has been at the forefront of the counter-insurgency operations in Jammu and Kashmir came up with an official denial on its Twitter handle. It said: "No army soldier, officer court martialed/ imprisoned in the Budgam incident of November 2014," giving lie to the good Captain's assertion. However, the clarification notwithstanding, a large number of Whatsapp messages, google groups and twitter handles started taking the army to task for punishing the soldiers once again highlighting the dangers of depending on unverified posts/reports to express opinions that spread confusion among the serving ranks of the military and demoralising them.

Last month, at a seminar on Social Media and the Military at Chandigarh, I have had an occasion to point out to this pitfall. There I cited an example of how some months ago, a senior veteran criticised the Ministry of Defence for deciding to appoint 'outsiders' to sit on promotion boards of senior military commanders. Again, the article was written without bothering to cross-check facts. There was no such decision taken and yet, the article got widely circulated giving false impression and further adding to the already existing negative sentiments against the 'civilian' in military minds.

Other such examples of misleading, untrue posts doing the rounds abound but suffice it to say that veterans--many of whom are active keyboard warriors now--may need to pause a bit and rethink about the propensity of using the stratagem of 'forwarded as received.' It is easy to morph, amend, twist articles, photos and posts because of improved technology and faster communication, thanks to the 'mobile republic' that India has become. A civilian forwarding a post about the military will not be taken as seriously as a veteran's forward would be.

The veterans, I feel, have a great responsibility to support the organisation that they served with dedication and loyalty. Please level constructive criticism by all means. But please also have faith in the current leadership which may be faced with new challenges and circumstances, the old timers never had to face.

The military too needs to reach out to veterans and keep the community informed about various new initiatives and developments concerning the organisations. As I mentioned in Chandigarh last month, every Command and of course service HQ s should think of a 'communication cell' where veterans active in the traditional media and on social media can post their queries and clarify doubts so that gaffes that keep occurring because of misinformation/disinformation are kept to a minimum.

Coming back to the current situation in J&K. The Army has studiously kept itself away from the current law and order issue in Kashmir valley where protesters have been on a rampage in the wake of the killing of Burhan Wani, a self-proclaimed terrorist. In one instance, the Army patrol, when faced with a riot-like situation, followed the standard operating procedure of warning the crowd before firing at the crowd that tried to snatch weapons from the soldiers. Unlike the police and central armed police forces, the army has to shoot to kill which is exactly what the patrol did.

A closer look at figures pertaining to counter-insurgency operations this year is also revealing. According to official figures, since January to 24 July 2016 the security forces have eliminated 85 terrorists as compared to 43 for the corresponding period in 2015 while 17 have been caught as compared to just five last year. That Pakistan has once again ‘opened the tap’ in pushing in terrorists into Jammu and Kashmir is evident from the fact that there have been over a dozen infiltration attempts from January to July.  Ten soldiers have already died defending the country this year so far and this is not counting police and CAPF personnel who laid down their lives during their duty in J&K.

Clearly, there is no let up in Pakistan’s attempt to stir trouble in J&K, especially in the Kashmir Valley.  And of course there is no policy to rein in the Army and appease terrorists.

The Indian Army has stood firm for over quarter of a century in thwarting this attempt. The military leadership, soldiers and indeed all security forces continue to battle difficult circumstances in Kashmir. Let’s not add to their woes by spreading half-baked stories, factually incorrect posts and inaccurate articles.

Kargil conflict recalled, by a leader on the ground

The month of July always brings back memories of the summer of 1999 when India experienced a range of emotions—pain, loss, anguish, pride, triumph and military victory—thanks to the young men and their not so young leaders who conducted one of the most famous military campaigns in what, till then, was an obscure place: Kargil. Operation Vijay, the official name of Indian Army’s fierce counter-offensive in the rugged terrain of Ladakh’s Kargil-Drass-Batalik area, is probably the most well-known military operation in independent India’s history.

It is rightly known as the first military conflict that entered Indian drawing and bed rooms, thanks to the then fledgling Indian TV news industry. In subsequent years, many of us in the media have written and reported on the heroes of those days, about the victory achieved by the Indian Army and the Indian Air Force against heavy odds. Kargil, 1999 is by now very well chronicled. So why am I writing this piece? 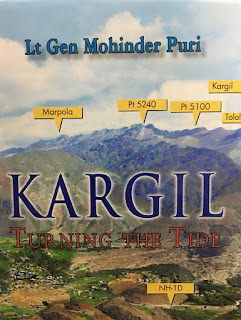 Because, I finally found time to read what is perhaps THE most authentic and comprehensive account of the Kargil conflict. Lt Gen Mohinder Puri, who commanded the 8 Mountain Division—hastily rushed into Kargil from Kashmir Valley—as a Major General in 1999, waited for than 16 years to pen down his memories and his observation on the conflict that has come to define the Indian Army’s image in the 21st Century. His book Kargil: Turning the Tide, published by Lancer Publishers in 2015 can easily be described as the most intimate account of the Kargil conflict simply because it is written by the man who led the Indian charge in that limited theatre.

Although Gen VP Malik has written a detailed account of Kargil 1999, his was a take as seen from the strategic level. Many others too—soldiers and journalists included—have described what happened in Kargil, but I recommend Gen Puri’s book for the simple fact that his is the on-ground report. While the first nine chapters clarify many doubts that students of recent military history may have had about the conduct of operations, the initial mistakes, the setbacks and the recovery all along the front line, to me the most important part of this book are Chapter No. 10 and 11 titled Principles of War and Reflections, respectively. The entire essence of Operation Vijay is encapsulated in these two chapters and contains many lessons which I am sure, Gen Puri’s successors deployed in this sector have imbibed in the later years.

The 8 Mountain Division, rightly called ‘Forever in Operations’ since it has never had a moments respite after its raising in 1963 (in the north-east), is now entrusted with guarding the entire Kargil-Drass-Batalik frontage of the Line of Control (LoC) with Pakistan.

Gen Puri has been frank in admitting some of the pitfalls and mistakes that inevitably happen during a hot war but he has also shed light on how innovative tactics—employment of Bofors gun in direct firing role, for instance—helped the Indian troops turn the tide. He also gives due credit to the Indian Air Force and points out that restrictions imposed by the political leadership in not allowing crossing of the LoC, actually created more problems for the air warriors since they did not have enough depth to launch their attacks and instead of approaching the objective from south to north, the air attacks had to launched in east-west direction, restricts the IAF’s options. The Army too suffered because of the restrictions. As a formation commander he wanted limited permission to cross the LoC for purely tactical purpose but the terms were unambiguous. As Gen Puri says: “Exercising...the options to cross the LC would have meant faster operations, lesser casualties without much loss of credibility. It would have shown us as a nation which applies restraint but cannot be pushed around. Wars if thrust upon a country must be fought on enemy’s territory; unfortunately in military terms we failed to achieve this objective.”

That despite this major restriction and many other adverse factors such as difficult terrain, critical equipment shortages and intense public scrutiny, then Maj Gen Mohinder Puri and his officers and men of several units finally evicted the intruders and regained Indian territory , albeit at very heavy cost, cannot be forgotten. As the nation gears up once again to celebrate the anniversary of the Kargil victory later this month, those interested in what actually happened in those summer weeks in a remote border area 17 years ago, must get hold of Gen Puri’s honest account of the Kargil conflict, if only to understand what it takes to stake your life to protect the nation.
Posted by Nitin A. Gokhale at 8:26 PM 1 comment: