Fifty years ago, the Indian Army raised a new formation, primarily to combat insurgency in the north-east. Today, not only it has accomplished its missions in the north-east along with Jammu and Kashmir, but more importantly, won the Kargil conflict for India in 1999.This is the story of the formation, the 8 Mountain division, which is 'Forever in Operations'.

(Video is here:http://www.ndtv.com/video/player/ndtv-special-ndtv-24x7/the-kargil-victors-8-mountain-division-forever-in-operations/283886?pfrom=home-lateststories)
Headquartered in Khumbathang behind a huge mountain feature, the 8 Mountain Division, ever since it was raised in 1963, has mostly operated in the mountains and delivered results every time. There are numerous tales of valour and dedication of the Indian Army, but what makes 8 Mountain Division stand out is its adaptability.
Under Major General KV Krishna Rao, who later became Chief of Army Staff, the Division moved to fight in east Pakistan to help create Bangladesh. Besides General Rao, this division has produced two more Army Chiefs--General BC Joshi and General VP Malik. For the first 27 years, it operated in the states of Nagaland and Manipur combating insurgencies, earning the soubriquet - 'Forever in Operations'. 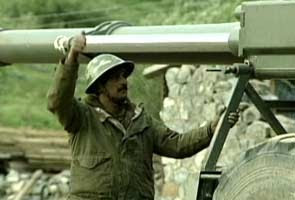 As trouble erupted in Kashmir in the late 80s, the Army headquarters decided to fall back upon the 8 Mountain Division. Major General VP Malik moved it to the Kashmir Valley, making it the spearhead of the counter-insurgency operations. However, the formation is equated with the 1999 Kargil conflict. Captain Vikram Batra, Anuj Nayyar, Vikrant Thapar and many other became household names for their daring exploits at impossible heights. During this month 14 years ago, last of the Pakistani intruders were evicted from the heights of Kargil-Drass and Batalik underlining the importance of 8 Mountain Division. Hastily rushed into this sector from Kashmir Valley, it took the might of the Bofors guns and the raw courage of the soldiers to earn a hard-earned victory in the forbidding mountains. 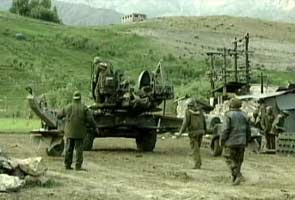 Its current General Officer Commanding, Major General Shokin Chauhan, says: "The posts are high, the altitude is difficult, the mountains are treacherous, the wind is bad and we have an enemy on the Line Of Control, which has not yet stabilized. So all in all it makes for a very difficult job for our boys to do, but they do it commendably. And I hope, very strongly, that people will recognize the valour of the soldiers of 8 mountain division and accept that the Indian Army soldier is better than the best."  The 1999 conflict was also one of those rare battles in which the infantry soldier and artillery guns played almost equal role in overcoming the adversary. At such altitude, the artillery will remain a vital element of warfare.While the 1999 war may never be repeated, it is essential to keep the memory of those who made the supreme sacrifice alive. Every year on July 26, the Indian Army remembers its heroes, who won the Kargil conflict.
Posted by Nitin A. Gokhale at 3:24 PM No comments:

Only money for a Mountain Strike Corps in not enough

After the initial euphoria, the reality check.

The financial sanction given by India's Cabinet Committee on Security (CCS) on Wednesday to raise a Mountain Strike Corps specifically aimed at launching offensive operations against China--if need be--is but a first step in what promises to be a long haul in adding 40,000 new troops to the country's 1.3 million strong Army.

The figure of Rs 64,000 crore (roughly 11 billion dollars at 1$= Rs 60 rate), remember, is to be spent over seven years which is just as well since raising new formations as large as a Corps is not an easy task. It is further difficult to make that formation capable of mountain warfare. For mountains gobble up troops; they take a heavy toll on man and machine. Living at altitudes upwards of 12,000 feet going upto 22,000 feet and being fighting fit is no child's play. The Himalaya--along which the entire 4,000 km China frontier is spread out--is an unforgiving terrain. So just 'sanctioning" money will mean nothing.

A sustained effort by all stakeholders--MoD, Ministry of finance, Army, IAF, Border Roads Organisation and most importantly the Ministry of Forest and Environment along with respective state governments--will have to be on the same page if the wish to have a Mountain Strike Corps is to be translated into a reality.

Why do I mention all these ministries? Because in the recent past, the 'Green Brigade' has proved to be a big obstacle in building strategic roads in Arunachal Pradesh, Sikkim, Himachal Pradesh, Uttarakhand and Ladakh. It is nobody's case that environment should not be protected but a balance needs to struck in caring for the environment and national security imperatives. The state governments will need to back the plan by facilitating speedy allotment of land in far flung areas.

Building roads in the higher reaches if these states is a painstaking process with the working season available to the Border Roads barely limited to three or four months. Similarly establishing permanent infrastructure for troops, creating a stable logistics line, putting in place ammunition and supply hubs besides strategically placed artillery gun positions is a long term process. Nothing is going to be easy.

The Defence Ministry will have to work in close coordination with the Finance Ministry to release required funds on time.

Finding the right contractors with the right skills and willingness to work on isolated, remote areas is another big challenge. The IAF for instance has been trying to finalise contracts to upgrade seven advanced landing grounds (ALGs) in Arunachal Pradesh to enhance its ability to airlift troops rapidly all along the China frontier for the past three tears but is still to a find a satisfactory solution.

The new mountain corps will require to have inbuilt airlift capability, light artillery which can be easily transported, even airlifted in the high mountains. Given India's painfully slow process of weapons acquisition, empowering the Mountain Strike Corps quickly will be a big challenge.

Given these difficulties, Beijing will not be unduly bothered although it will certainly make the mandatory noises may be by describing the Indian decision as provocative.

It is all the more necessary for the government to walk the talk in making the new formation a reality by adhering to the timelines.
Also See: http://www.ndtv.com/convergence/ndtv/new/NDTV-Show-Special.aspx?ID=507
And this:
http://nitinagokhale.blogspot.in/2012/10/recalling-1962-half-century-on-my-small.html

Travelling to Kargil and Drass from Srinagar has never been easy. For years since 1999, that is what I have felt despite making at least two dozen trips. Last week was no different. The challenge posed by the might Zozilla, the traffic, the terrain everything is different than one normally encounters.

Between Monday and Saturday, me and cameraperson colleague Tariq revisited the Kargil-Drass-Batalik sector to make a programme on the 8 Moutain division AOR (Area of Responsibility). Why 8 Mountain Division?


One because I have had an old association with this remarkable formation, raised half a century ago to combat the Naga insurgency. This has been the Indian Army's "go-to" formation in every major military campaign since the mid-1960s.

In every crisis, it has been called upon to deliver. In 1971, in the middle of combating a tough Naga insurgency, the Division was called upon to take on the Pakistanis in the 1971 war which it did with great elan and played a major part in India's greatest military victory.


Back in the North-east after the East Pakistan campaign, it took on the responsibility of combating Meitei and Tripura insurgencies in the 1970s and 1980s. When Kashmir erupted in 1989, Army HQ selected the 8 Mountain Division to move to the valley. Again it proved its worth by chalking up major successes in the CI operations between 1990-99.

In the summer of 1999 Pakistani intruders caught the Indians napping in Kargil-Drass-Mushok-Batalik sectors. Once again, 8 Mountain Division was drafted to evict the  intruders from those impossible heights which it did--at a major cost to lives and limbs of gallant soldiers. Since then 8 Div has been stationed in this area.

While I will be writing a more detailed account of the division whose motto is FOREVER IN OPERATIONS, one fact needs to be mentioned here: 8 Mountain Division has given the Indian Army 3 Chiefs in the past and the next likely Chief has also had the distinction of commanding it! The 3 Chiefs in the past were: Gen KV Krishna Rao, Gen BC Joshi (who is no more) and Gen VP Malik. The next likely chief is Lt Gen Dalbir Singh Suhag, currently India's Eastern Army Commander. Here's a small glimpse into the sector.