Fulfilling a sacred contract with the soldier 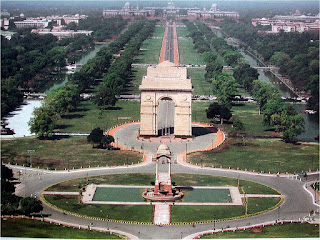 The  Ministry of Defence will soon invite international bids for constructing a National War Memorial at India Gate following the allocation of Rs 100 crore in the budget for 2014-15 presented to the Parliament on Thursday.
Although a basic design and concept for the proposed memorial is available with the Indian Army, the authorities want to explore more possibilities within that framework.
Defence ministry sources said the proposed concept includes a museum and a walkabout. Some of the images from a presentation made to Prime Minister Narendra Modi by the Army last month suggest


This is a welcome development. Otherwise 64 years after India became a Republic, we are still paying homage at India Gate, built by the British for the soldiers who sacrificed their lives for the Imperial power in World War I!  It is important to honour all the soldiers who have given blood, sweat and life for preserving India's independence and protecting its sovereignty. Otherwise, India will be like Japan or Germany, post-WW II—big economies without adequate military muscle. Let them know we care for them through the year and not just on two or three ritualistic occasions.
It’s important to recall what Kautilya (not Sun Tzu as many of us are fond of quoting) said ages ago about the duty of the King (in this case the Government) towards the soldier: “A country makes a sacred contract with its soldiers. A country that refuses to respect this contract with its armed forces will eventually end up getting forces that will not respect the nation (government).”
Kautilya, better known as Chanakya, also reminded King Chandragupta Maurya:
“The day the soldier has to demand his dues, will be a sad day.” Fortunately, after years of stalling a War Memorial, soldiers can look forward to a befitting memorial for their fallen comrades.